Sir Andrew is chairman of family-owned William Cook Holdings, one of Europe’s leading steel and engineering companies. He rescued the historic Company from near extinction in 1982, bought it back off the stock market in the face of a hostile takeover bid in 1997 and finally restored full family ownership in 2004. Today, the William Cook group maintains a commanding position in defence, rail and other industries where safety and reliability are critical.

Collected Writings covers the impact of policy emanating from both Britain and Brussels on the fortunes of the firm and by extension the UK manufacturing sector. As a notable supporter of the Conservative party, Sir Andrew’s views on Britain’s relationship with Europe became intensely newsworthy during and after the 2016 Brexit referendum.

The quality or otherwise of Britain’s transport network is another theme that runs through the collection. Sir Andrew, a lifelong train enthusiast, skewers the mismanagement of the UK railway system with characteristic exactness and contrasts with the efficiency of the railways in his adopted home of Switzerland.

Collected Writings contains letters and articles from the 1990s to the 2020s published in titles including The Times, the Financial Times, The Daily Telegraph, The Guardian, The Daily Mail, The Week, Standpoint, The Sheffield Star, The Yorkshire Post and the railway trade press.

The collection was compiled by journalist Bernard Ginns, former business editor of The Yorkshire Post, who provides context and background through his footnotes. His communications consultancy is Branksome Partners Ltd.

Mr Ginns said: “This collection of writings contains some jewels for students of contemporary history and indeed philosophy, politics and economics as the correspondent addresses the issues of the day in distinctive style. Railway enthusiasts will discover a treasure trove.”

The book is available now via publishing@william-cook.co.uk. Price £27.50 including post and packaging (UK), £30 (overseas).

Previous Andrew Cook titles include: ‘Thrice Through the Fire’ (1999); ‘Ashes and Dust’ (2011) and ‘The Doctors of Ulm’ (2nd edition, 2019). Additional titles are ‘Coal Steam and Comfort’ by Andrew Rhys Thompson and Andrew Cook (Platform 5 Publishing, 2010) and ‘The History of the William Cook Company and the Cook Family’ by Dr Philip Hansen (1998). 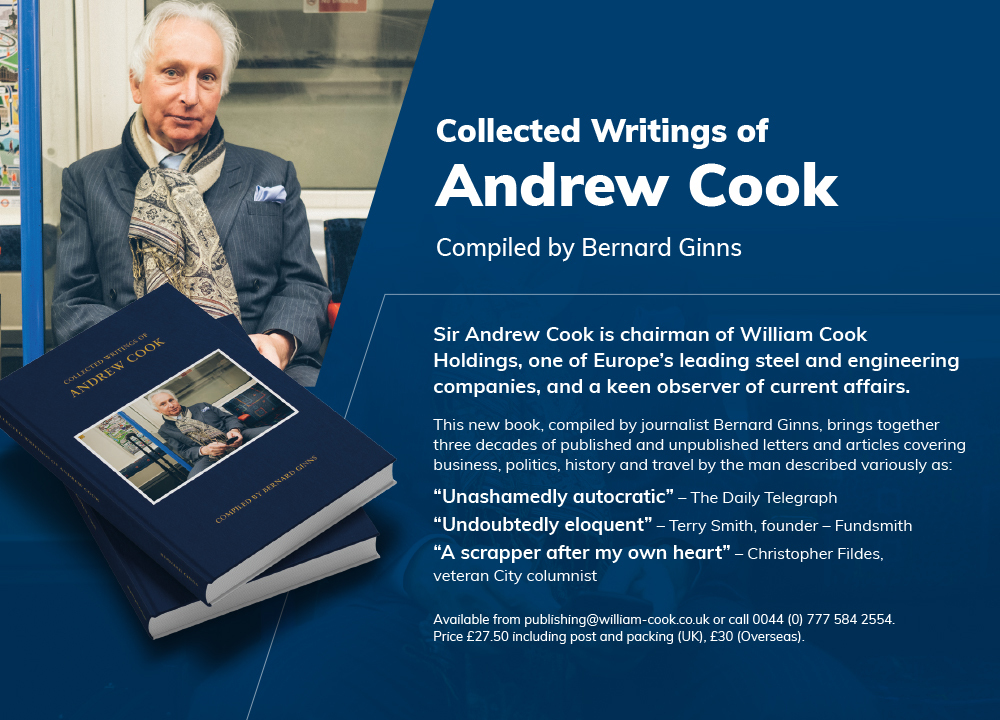